Here’s “Uncle Sam” at the recent Peterborough Truckfest on the TruckMax stand with our youngest recruit Henry! For more information regarding the exhaust system please click: Truckmax

We were very privileged to be able to provide transport for the Batmobile as it toured the UK and several countries during March to promote the film Batman V Superman. First stop was Manchester and the Blue Peter studios. Catch a glimpse of Barney with the Batmobile here: http://www.bbc.co.uk/cbbc/watch/bp-fan-club-batmobile A quick visit to brands hatch was […]

We are delighted to announce the arrival of our new tractor unit “Uncle Sam”. It’s a DAF 105 XF 80Ton special types, and has just had a full stack exhaust system fitted at Truck Max, Wisbech. We will be sending it out very soon so keep an eye out for it! If you want to […]

This November (2015) Stathams were involved with a very prestigious London event! Abels Moving Services as one of the sponsors of the London to Brighton Vintage Car Run took part in the Saturday Regent Street Motor Show. Held this year on the 31st October 2015, this London event attracts over 400,000 visitors to the show. […]

In early 2015, Statham’s were approached by the organisers of the Help for Heroes Leighton Buzzard Fundraising Spring Event to provide recovery back-up. We were happy to oblige and 3 our recovery vehicles joined the 50 strong Truck convoy which processed from M1 Junction 9 TruckStop at Flamstead to Billington, Leighton Buzzard on the morning […]

In late September 2014, Statham’s celebrated the completion of the modernisation and extension to its head office in Dunstable with a Client Open Day followed by a Family Fun Day. On the Friday, clients were treated to a site tour featuring a special display of some of the Statham’s Recovery fleet. This was followed by […]

Summer 2014 saw the retirement of Janet, our part-time book-keeper, who had joined us back in 2002 – in the very early days when the office was John and Samantha’s box bedroom in their house in Redbourn! Not only a very organised accounts expert, Janet is an accomplished baker – whose signature bakes of Bread […] 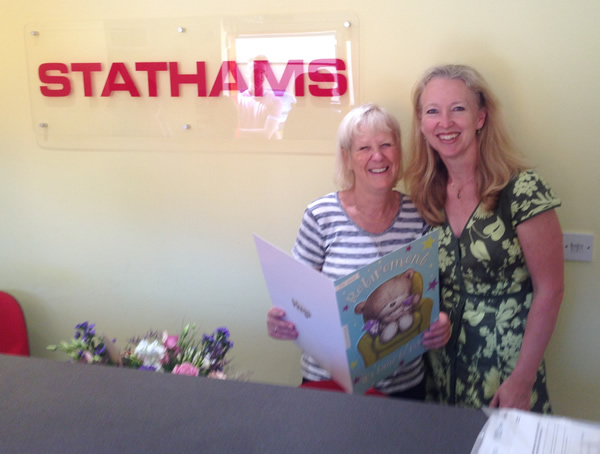