In late September 2014, Statham’s celebrated the completion of the modernisation and extension to its head office in Dunstable with a Client Open Day followed by a Family Fun Day. On the Friday, clients were treated to a site tour featuring a special display of some of the Statham’s Recovery fleet. This was followed by a short speech by John and buffet lunch rounded off by a raffle for a magnum of champagne. Then we went outside for the Ribbon-cutting and group photo.

On the Saturday, the Statham’s team, clients and their family members enjoyed the sunshine at the Fun Day. John and Samantha manned the bar. Sharon our HR Manager and her husband Ray manned the BBQ whilst the kids got to see the trucks up close. The workshop had been cleared out to house a massive bouncy castle which the adults could not resist sliding down! The music was provided by the Gavioli Fairground organ.

Then Colin (AKA Mr Collywobbles) entertained the children by getting them to perform circus skills such as juggling followed by a magic show. It was a nail-biting moment when he sawed Chris’ daughter in half! Keith brought along his pet Iguana Ash which enthralled kids and adults alike. Samantha had forgotten that Colin also did Hypnotherapy and so was surprised to see Toby “asleep” standing up – his wife Clair nearly had hysterics as he could not count to 10 or understand how Colin had got his mobile phone number. Well done Toby for being a good sport! 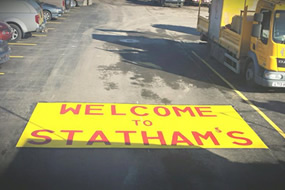 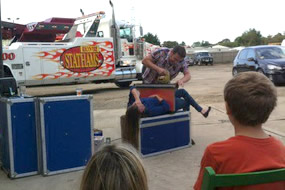 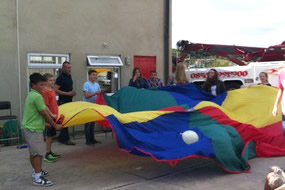